Hundreds of pro-lifers from Rockland County and the surrounding area came together at the intersections of Rte. 59 and Middletown Rd. in Nanuet on Sunday, Oct. 4, for the 17th annual Life Chain.

The Life Chain is a nationwide, peaceful, public assembly of pro-life Americans praying for our nation and for an end to abortion. 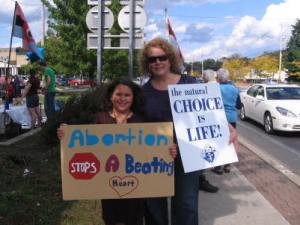 It is usually held on the first Sunday in October. Among the other cites throughout the U.S. where Life Chains were held this year were nearby White Plains, Yonkers, Bronx, Cortland, Scarsdale, Hastings-on-Hudson, Mt. Kisco, Middletown, Warwick, and Poughkeepsie.

The Life Chain in Rockland is organized by Eileen Peterson of Stony Point, a pro-life advocate who works for Project Rachel, a program to help women who have been hurt by abortion.

Even before the event began at 2 p.m., the staging area, in the Rockland Plaza across from the Nanuet Mall, on the northwest corner Rte. 59-Middletown intersection, was filled with people.

Sean Mundy, James Brodden, and Anne Weldon, students from the St. Thomas Aquinas College in Sparkill who were staffing the welcome table, offered them a choice of posters with slogans such as “Pray to End Abortion,” “Abortion Hurts Women,” and “Abortion Kills Children,” and directed them to locations along the intersection.

Along with Marie Peterson, STAC’s assistant director of campus ministry, the students also accepted donations of baby clothes and other items which participants brought for distribution to three local pregnancy support programs: Birthright of Rockland, in Nanuet, and CareNet and Good Counsel, both in Spring Valley. 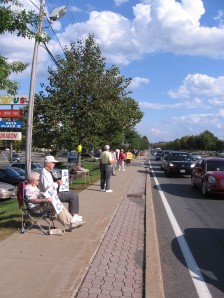 By the time the Life Chain came to a close at 3:30, some 600 to 700 people had joined the chain of people that stretched along the westbound side of Route 59 from the Nanuet Mall to the Pizza Hut in the Kohl’s mall. The chain on the southbound side of Middletown Road reached from the Furniture Plaza to the intersection, where it crossed, and then continued along the northbound side to the Stop & Shop.

Ninety minutes of prayer and witness

The Life Chain is meant to be a time for prayer and thoughtful reflection and pro-lifers of all denominations used the prayers, songs, and meditations that were printed on the reverse side of the Life Chain posters that they held. Others stood in silent prayer. Small clusters could be heard saying the rosary on the pavement over the hum of the near constant traffic along Rte. 59.

Many local houses of worship were represented in the chain including Gracepoint Gospel Fellowship and Beth Am Messiah in New City, Grace Conservative Baptist Church in Nanuet, and several Catholic parishes.

Participants greeted friends who come to the Life Chain each year, and talked quietly discussing their feelings about abortion.

The afternoon was bright and sunny under fair-weather clouds, American and pro-life banners snapped in the breeze, and the temperature at the start of the Life Chain was 76 degrees. Everyone agreed that the weather couldn’t have been more perfect.

This year the Life Chain was dedicated to the memory of Monsignor John Harrington, the beloved pro-life priest and former Vicar of Rockland County. who had served in parishes here for over 30 years. Msg. Harrington died on Aug. 22 at the age of 88.

A staunch defender of human life, Msgr. Harrington was a key force behind the Rockland pro-life movement from its inception. He had served time in prison several times, having been arrested for protesting at local abortion clinics.

Yet, Eileen Peterson said he was a simple, humble man.

On Aug. 1, three weeks before his death, Eileen broached with the monsignor the idea of honoring his work by dedicating the 2009 Life Chain to him.

She asked him, “What do you want me to say if someone asks me why we’re doing this?”

His response was “Tell them: I was doing my job.”

Betty Braun, a longtime pro-life supporter who attended the Life Chain, praised Monsignor Harrington’s decades of work. “He was a strong, loud voice for the unborn,” she said. “And he had a wonderful sense of humor. I loved him.”

Bill Martin, a leader of pro-life movement in Rockland for many years, remembered the beginning of the “rescue” movement when many committed pro-lifers converged on abortion clinics to use all nonviolent means to stop the abortions scheduled to be performed there that day.

The participants were regularly arrested, including Msgr. Harrington, who served time in prisons in both Rockland and Westchester counties

Bill recounted how at a rescue at the Dobbs Ferry abortion mill, the grounds were set off by a wall, which they surmounted, literally, by Bill boosting the monsignor up and over.

He was a man of true courage, Bill said, “a real guy, who stood up for what he believed in.” And, Bill said, the monsignor didn’t mince words when it came to expressing his contempt of his fellow Catholic Cardinal Joseph Bernadin’s “seamless garment” philosophy, which he felt diluted the primacy of the defense of the unborn as it placed abortion as only one of the many evils which threaten human life.

Bonnie Walsh of West Nyack, said of the Monsignor Harrington, “I love him and I miss him.”  “He would always be here,” she said recalling past Life Chains. Then she quickly corrected herself, “But he really is here. Absolutely. It’s just that we can’t see him.”

From all corners of Rockland and beyond 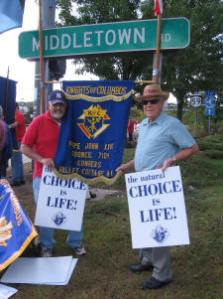 A strong presence at the Life Chain, right at the heart of the action at the intersection on Rte. 59, were the Knights of Columbus, a Catholic fraternal order that is uncompromisingly pro-life.

Holding their council banners were Phil Naclerio and Bob Marcario from the Pope John XXIII Council in Congers, John Watson, the Rockland chairman of the Knights of Columbus, and knights from the Triune Council in Pearl River and the Joyce Kilmer Council in Suffern. They were joined by the Rev. John Puntino, SDB from the Marian Shrine in West Haverstraw.

Also present were a contingent of nuns from the Sisters of Life from the Bronx, founded in 1991 by John Cardinal O’Connor for the protection and enhancement of every human life. In their distinctive blue and white habits, the professed nuns, novices, and postulants, took up their places along Route 59 among the students from Albertus Magnus High School.
About 60 students from the school, mainly members of the Pro-Life Club, were there in force. The Pro-Life Club, which is the largest organization in the school, has about 100 members and meets biweekly, according to Mary Parisi, theology teacher at the Roman Catholic high school and club moderator. She was accompanied by Joe Troy, the president and principal.

Compared to past generations “these kids are more educated about the issue of abortion,” Parisi said, “and they’re more sensitive.” She explained that, unlike the past, when having an abortion was apt to be kept quiet, today it’s talked about, and students have friends who have gone through abortions and so they understand the pain and the hurt.

Another large group of young people were stationed at the westernmost end of the chain on Rte. 59: The Saint Anthony’s Youth Ministry – an enthusiastic group of 7th to 12th graders led by Sue Tyler and Susan Hahnenfeld. The group is also planning a baby shower to collect baby clothes and items for shelters.

Many of the clergy were present (and this reporter apologizes to any who were present but not mentioned) including the Rev. Koshy George from St. John’s in Piermont; Rev. Bill Cosgrove from St. Augustine’s in New City; Rev. Nicholas Callahan from St. Catherine’s in Blauvelt; and Rev. Brendan Gormley from St. Paul’s in Congers. Father Brendan concluded the Life Chain with a prayer that everyone will “embrace life in all its stages.” 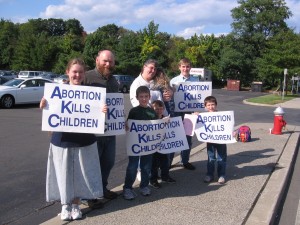 At 3:30 the participants ended their prayers, returned their signs, and by 4 o’clock the crowds who had lined the roads were gone.

But by then their message had been seen by thousands who had passed along Rockland’s most busy commercial arteries on that Sunday afternoon.
The work goes on

Monsignor Harrington’s job is done, but he would be proud that his work was going on.

Eileen Peterson said that now we have to do our job “to make our county a welcoming, life-affirming place, where women with a crisis pregnancy can find love and support and know they’re not alone.”

For many women who are in abusive relationships, she said, pregnancy is the most dangerous time, when men pressure them to abort, often using violence against them if they refuse.

It’s Eileen’s dream to found a safe haven in our county for victims of domestic violence, particularly those who are pregnant – an alternative to the Rockland Family Shelter.

She already has a name – The Msgr. John Harrington Safe Haven for Women and Their Babies. It will be a place where those who are alone or in danger will be welcome, nurtured, and loved – a haven reflecting it namesake, the kindly, good, and courageous man who fought the good fight to the end.