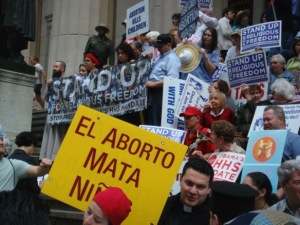 In order to protect our religious liberties from unwarranted and unprecedented government intrusion, the Archdiocese of New York has filed suit in federal court seeking to block the recent Health and Human services mandate that unconstitutionally attempts to define the nature of the Church’s religious ministry and would force religious employers to violate their consciences.
This is about religious freedom, pure and simple. It is about the government attempting to force the Church to violate its conscience. –Timothy Cardinal Dolan
The HHS Mandate includes sterilizations and abortion-inducing drugs — or the imposition of crippling fines.