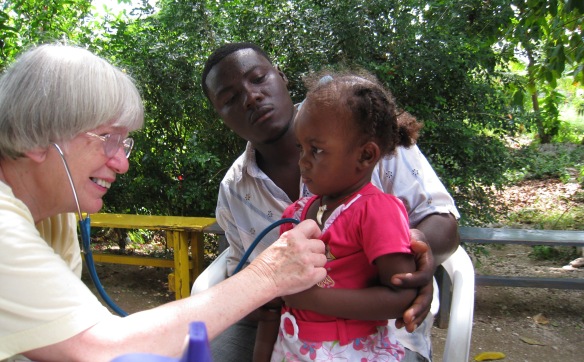 Mary Loftus, of South Nyack, has made 16 medical missions to rural Haiti providing medical care to Haitians in need.

Mary Loftus, Treasurer of the Rockland Right to Life Committee, was named Catholic Daughters of the Americas “Woman of the Year,” at the organization’s national convention in Pittsburgh this past summer. 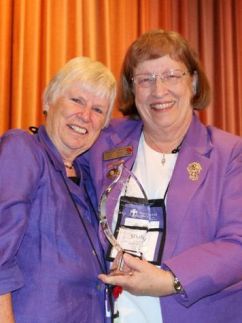 Mary is the Regent of the Catholic Daughters of America Court St. Anne, #866, in Piermont, N.Y. For the past seven years, along with her other charitable work, Mary has been a fundraiser and on-the-ground volunteer with the Friends of the Children of Haiti  (FOTCOH), an organization that brings healthcare and life saving support to over 15,000 Haitian patients of all ages at the FOTCOH medical clinic near Jacmel, Haiti.

At the convention — whose theme was Christ’s words “What you do for the least of my brethren, you do for me” — Mary, a nurse, gave a presentation on her medical mission work with FOTCOH.

She  told the audience, “I found out about the great need for the children of Haiti, and my heart has been in Haiti ever since; I have made 16 visits serving 2,500 in the village of my clinic.

“They walk three or four hours over mountains to come to the clinic. We have served individuals of all ages. Members of the New York courts donated over 2,000 pairs of flip flops for them.  As a nurse, I’m teaching classes for diabetes education as this is one of the most common diagnoses along with hypertension.”

Mary is also involved in making terry-cloth lined flannel diapers for the babies, and with an organization called Days for Girls,  she makes reusable personal hygiene product packages.

The “Woman of the Year” award was announced as a surprise as Mary was  walking back to her seat after she had just finished speaking. She said she was stunned and deeply touched by the honor she received — along with a check for $5,000 from the Catholic Daughters of America for FOTCOH.

Mary has personally raised $35,000 dollars over the years for FOTCOH and has organized local campaigns to collect footwear, clothes, diapers, and other needed items for the poor in Haiti. All who know her  will attest that she is an absolute dynamo of good works of all kinds, both here in Rockland — where she is a lifelong resident of Valley Cottage and the Nyacks — as well as in Haiti.

Mary is a shining example of what it means to be prolife, and we of the Rockland Right to Life Committee are very proud and grateful to have her as an officer, a co-worker and, most of all, a dear friend.

Below is the slideshow Mary presented at the Catholic Daughters of America national convention about her medical missions at the  FOTCOH clinic.

Hurricane Matthew Update:  FOTCH has reported that their clinic suffered minimal damage, and the Haitian workers and staff are all well. The Jacmel area was spared the massive flooding and mudslides other parts of Haiti are experiencing. There is water damage inside the clinic, downed trees, and washed out roads, but Mary and the rest of the November team will be able to return for their two-week mission on Nov. 6.

Click on a photo to enlarge it, and then scroll through the resulting slide show. 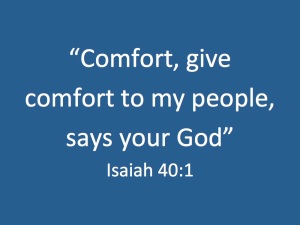 Friends of the Children of Haiti (FOTCOH) sponsors a clinic which is open for 2 weeks every other month (6 times a year) and during each clinic session a team of about 20 volunteers see close to 2500 men, women, and children with all kinds of illnesses and injuries. The patients come to the clinic from miles around, often walking barefoot for 3 or 4 hours to get to the clinic. 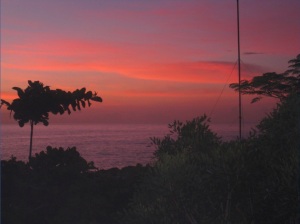 Haiti is a beautiful country. We can see a sunrise like this right from our clinic each morning. 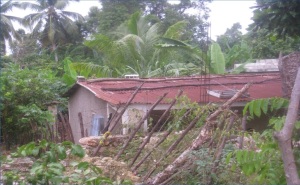 But this is the real Haiti. Most of the patients who come to our clinic live in little shacks like this, with no running water or electricity. 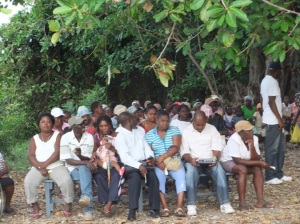 This is what the field outside our clinic looks like at 6 o’clock each morning. All these people are hopeful that they will get into the clinic before the day is over. And, if not, they sleep there and wait again the next day. 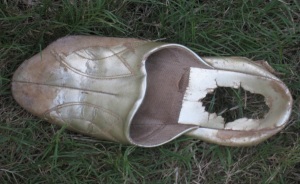 A woman walked to the clinic wearing this shoe and its mate (which looked just as bad). We sent her home with a new pair of shoes. 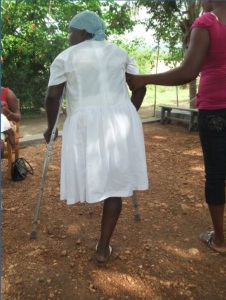 This woman lost her leg in the earthquake in 2010, but she still manages on this rocky terrain. 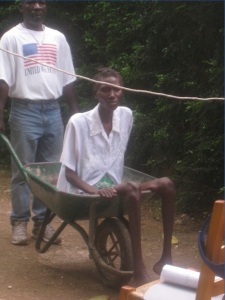 This woman was too sick to walk, so she was brought to the clinic in a wheelbarrow. (We call it the ambulance!) 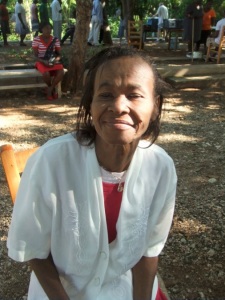 And here is a woman waiting to be seen. Most of the adults who come to the clinic suffer from high blood pressure and/or diabetes, although we see lots of other problems too. 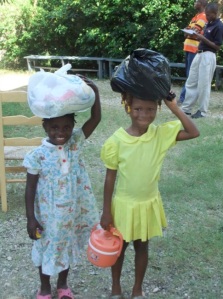 Many of the children who come to the clinic are doing well – sometimes all we need to do is give them a bottle of vitamins and a bar of soap. 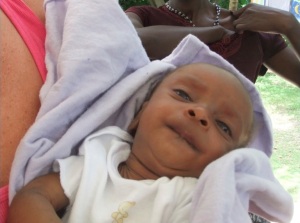 When this baby came to the clinic, she was 4 months old and weighed only 7 pounds. She was severely malnourished. We put her on our Medica Mamba program, giving the mom packets of fortified peanut butter and follow-up every week with a Haitian doctor who helps us out. 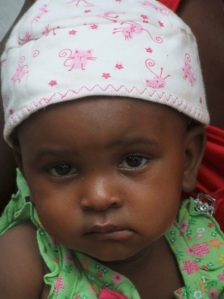 Here is the same baby one year later and doing well. 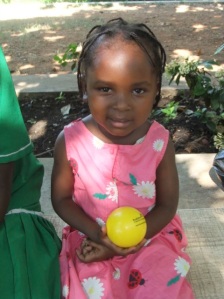 And here she is, a healthy 3 ½ year old, playing with the ball we gave her and SMILING! 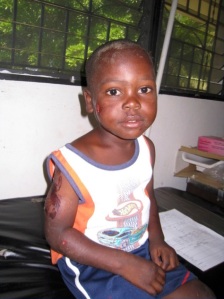 This child came to the clinic with some pretty severe burns. We do see quite a few burn patients – they cook on open fires, and very often children (and adults) suffer burns. 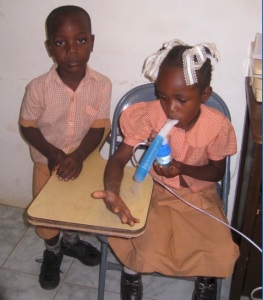 Asthma is another problem we see quite often in the clinic. Also notice that these children are in their school uniforms. There are many small schools in the area, and each school has a distinctive uniform. Children often come to the clinic in their uniforms because it is the best clothing they own. 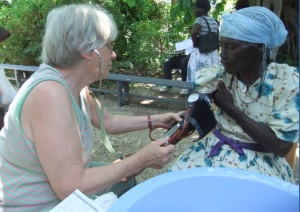 When I first went to Haiti, I worked in Triage, taking blood pressures and obtaining any important information from the patients. 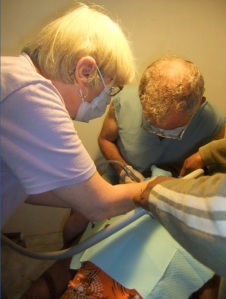 I even worked as a dental assistant once! But I am a Registered Nurse, Certified Diabetes Educator, and it wasn’t long before I realized that Diabetes is very prevalent in Haiti, and I knew I had to do something about that. 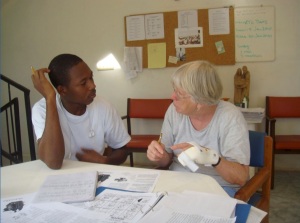 I met with a bilingual Haitian and developed a program to teach the many patients with diabetes how to better manage their disease. 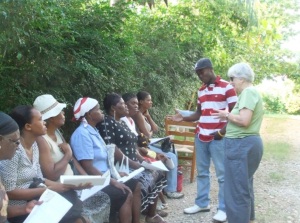 For the past 5 years I have been teaching little classes on diabetes (with a lot of help from Alex, my wonderful interpreter who is shown with me in this picture). 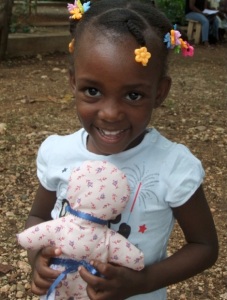 This little girl is holding a doll made by one of my friends in the Catholic Daughters. It is probably the first time she has ever had a doll of her own.

An organization called “Days for Girls” makes reusable feminine hygiene products, so necessary in third world countries. I work with a local chapter and bring kits with me every time I go to Haiti. 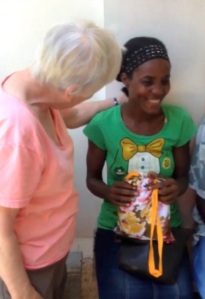 This woman has just received her kit and is very happy to have found a solution to this problem. 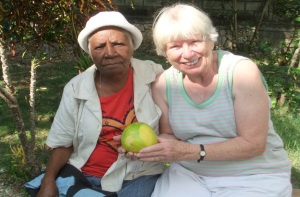 The Haitian people have so little, and yet they are so generous. This was a wonderful day for me when this woman came back to the clinic to give me a grapefruit from her garden to show her appreciation for my helping her with her diabetes. 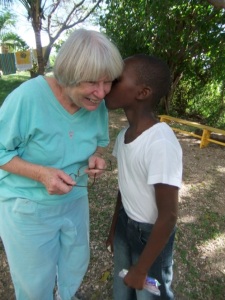 This kiss left an indelible mark. No wonder I keep going back to Haiti! 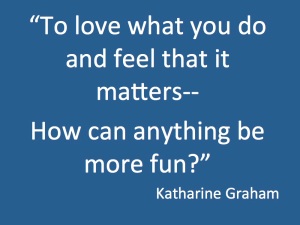