April 23, 2018—Spring Valley, NY.  On April 28, a pro-life rally will be held at the Planned Parenthood facility on Perlman Drive in Spring Valley, starting at 11 a.m.  This rally is one of more than 100 taking place outside Planned Parenthood centers across the United States, marking the third annual National Day of Prayer and Protest Against Planned Parenthood.
This nationwide day of prayer and protest is being coordinated by #ProtestPP, a coalition of more than 75 national, state and local pro-life organizations, in response to Planned Parenthood’s aggressive new agenda. In February, Planned Parenthood executive vice president Dawn Laguens declared that the organization is “going on the offense,” pursuing abortion expansion plans in “all 50 states.” This month, Planned Parenthood announced their participation in the “Win Justice” project, devoting $30 million to advancing their agenda in the November elections.
“Planned Parenthood is on the warpath,” said Eileen Peterson, the local coordinator for the event, “but too few Rockland County residents know the truth about this controversial organization. Planned Parenthood claims American women rely on them for healthcare, but in reality, four out of five women will never set foot in one of their centers. Planned Parenthood provides less than 1% of annual pap tests and zero mammograms, but they’ve cornered 35% of the U.S. abortion market. They’ve also been caught shielding child predators, defrauding Medicaid, and harvesting fetal tissue for profit.”
The protests to be held April 28 will also call on federal authorities to stop Planned Parenthood’s taxpayer funding. The effort to fully defund the organization of all federal tax dollars—about $430 million annually—has stalled in Congress. But an effort is now underway to revise Title X family planning rules to block Planned Parenthood as a recipient, and deprive them of some $60-80 million annually.
Peterson emphasizes that every dollar taken from Planned Parenthood would be redirected to healthcare providers that are not involved in abortion. “The effort to defund Planned Parenthood has nothing to do with taking healthcare away from poor women and families. It’s about taking tax dollars away from the nation’s largest abortion chain,” she explained.
#ProtestPP is a coalition of more than 75 local, state and national pro-life groups, headed by three national pro-life activist organizations: Citizens for a Pro-Life Society, Created Equal, and the Pro-Life Action League.
For more information please contact: Eileen Peterson (845) 492-6709   rachelminister1@aol.com
See also Why Defund Planned Parenthood? at ProtestPP.com.
Advertisement

Sr. Bethany Madonna of the Sisters of Life speaks to the students at the conclusion of the ‘Rose Mass’ at Sacred Heart Church.

The eighth graders of the Regional Catholic Schools of Rockland County celebrated their annual ‘Rose Mass’ to give thanks to God for the gift of human life. The mass took place at Sacred Heart Church in Suffern on Jan. 27, the day of the March for Life in Washington D.C.

Winners of the Knights of Columbus McCloskey Council 4565 annual “Keep Christ in Christmas” poster contest receive their awards at the Knights’ Christmas Party.

Dec. 5 & 12 — At their annual Christmas parties, the the Knights of Columbus Triune and McCloskey Councils again showed their commitment to protect all human life by presenting generous Christmas gifts to organization who work in behalf of the unborn, mothers and children in need of help, school children, the orphaned, the sick, and the disabled. Parishes that are served by these two councils also received donations.

Local prolife groups who were recipients’ of the Knights’ generosity included the Rockland Right to Life Committee, Birthright of Rockland, the Sisters of Life, and Good Counsel Homes. END_OF_DOCUMENT_TOKEN_TO_BE_REPLACED

By Sean Patrick Miller, guest blogger and author of Full of Life.

The coming of Our Divine Savior is shrouded in disguises even though He is right before our very eyes.

Perhaps the Jewish people were expecting their savior to deliver them from slavery in a very dramatic and awe-inspiring manner. Yet, the Lord quietly decided to come to His people in an unassuming and obscure way. A tiny infant in the piercing cold winter night quietly and almost secretly entered the world without any fanfare … almost completely unnoticed. The Lord revealed Himself first to the humble as He came to the shepherds, the God-fearing Holy Kings, and, of course, Joseph and Mother Mary. END_OF_DOCUMENT_TOKEN_TO_BE_REPLACED

In spite of the nearly $100 million advertising campaign by Planned Parenthood, Emily’s List, and NARAL targeting prolife candidates, we emerged from last week’s election with a prolife majority still in place in both houses of Congress and, of course, a prolife president, Donald Trump.

This bodes well for the advancing of prolife legislation such as the Pain-Capable Unborn Child Protection Act, which would ban abortions after 5 months, and the Dismemberment Abortion Ban Act. And most important to our efforts is the appointment of a Supreme Court Justice to replace Justice Antonin Scalia, which is made by the president and confirmed by the Senate.

Unfortunately, the campaign of Wendy Long against Sen. Chuck Schumer was not successful, but Ms. Long never backed down and kept prolife issues on the forefront during the election, keeping awareness high. Thank you, Wendy for all you’ve done for the unborn, the handicapped, and the elderly. 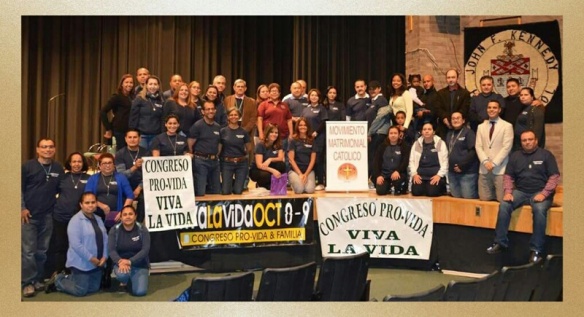 The 8th annual Prolife Conference, a Spanish program  by the Archdiocese of New York’s Office of Family Life/Respect Life, was held on Oct. 9 at John F. Kennedy H.S. in Somers, N.Y.

“The world needs mercy and we have to respect all forms of life.  We need to fight for our children.  The battle continues.” Those were some of the words of Fr. Agustino Torres, CFR, in his opening talks at the VIII Pro-Life Congress held on October 8th at Cardinal Hayes High School, Bronx and on the 9th at Kennedy Catholic High School, Somers. END_OF_DOCUMENT_TOKEN_TO_BE_REPLACED 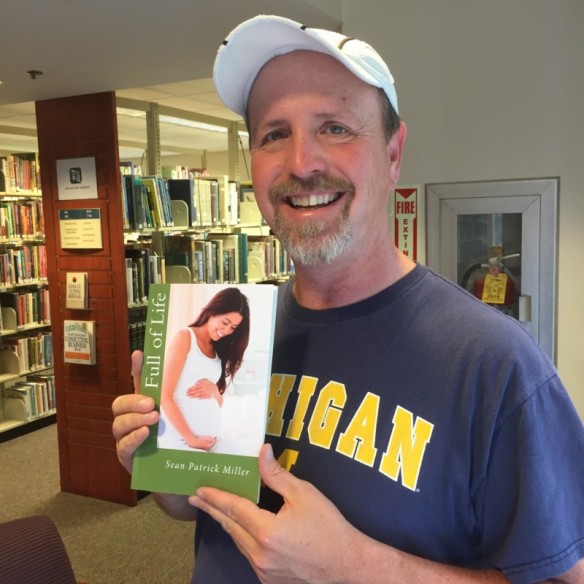 Sean Miller, prolife author and guest blogger for this site, will introduce his new book, Full of Life, at a  “Meet the Author,” presentation at the Hillsdale Library in Hillsdale, N.J. on Tuesday, Sept. 27 at 7 pm.

He will be joined by staff of the New Hope Pregnancy Center in Englewood, N.J., an outreach organization for first-time single mothers in a crisis pregnancy situation. New Hope provides subsidies for housing, daycare, education, and counseling and commits to  new mothers, helping them tend to their everyday and emergency needs via a one-on-one Mentor support system.

Come out to support Sean and hear about New Hope and his new book. The address of the Hillsdale Library is 509 Hillsdale Ave, Hillsdale, NJ 07642, It’s only 13 minutes from Pearl River, an easy drive.

Margie Fitton, co-founder of the Rockland Right to Life Committee, and her son, Michael, were among the worshippers at the morning of prayer for Life and America.

Starting the July 4th Independence Day holiday with a morning of prayer for our nation has become a tradition at the Mary Help of Christians Chapel at the Marian Shrine in Stony Point. With plenty of time left in the day for barbecues and fireworks, hundreds first come here to ask God for his blessing and healing for America, its leaders and its people, and to pray  for a restoration of respect for the gift of Life.

The morning included mass, Adoration of the Blessed Sacrament, and recitation of the rosary and Divine Mercy Chaplet. The concelebrants were three priests who are known for their prolife efforts in Rockland: Fr. Nicholas Callahan, formerly of St. Catherine’s in Blauvelt and now studying canon law in Rome, Fr. Brendan Gormley of St.Anthony’s in Yonkers, and Fr. John Wilson of St. Gregory’s in Garnerville. 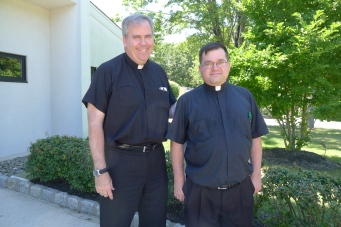 The main celebrant and homilist was Fr. Nicholas who spoke about why the prolife movement has reason for hope, even in the face of  recent Supreme Court rulings against us. Drawing a comparison between the impact of death and horror on the battlefield and the response to the slaughter of millions by abortion,  he said that there eventually comes a point of great “discouragement and exhaustion” against the familiarity of “blood, futility, suffering, and death.” That happens, he said,  because we are made to love life, and it’s “what the human soul wants to have.” There will be a turning point where the cause for life will prevail.

And also, he noted, from a theological point of view, the battle against evil has already been  won on the Cross, where we find in Christ the “grace to repair every heart and heal every wound.”

At the end of mass, the crowd lined up in the vestibule to receive the “first blessing” from Fr. John Wilson, who was  recently ordained a priest of the Archdiocese of New York.

This annual morning of prayer, sponsored by the Rockland County Catholic Coalition and the Helpers of Gods’ Precious Infants, has  become an occasion where many who have spent decades in the prolife movement get the chance to see each other again. Margie Fitton, co-founder of Rockland Right to Life and past president,  was among the worshippers. Eileen Peterson was organist and led the choir.

Sean Miller, a guest blogger for this website, recently published his first book, Full of Life, a collection of prolife writings. It became available on Amazon last week.

The book is meant to celebrate the Gift of Life and to provide inspiration and encouragement for all of us to stand up for life and support those in need – both the unborn baby and the mothers and fathers of the child.

Many of you know Sean, who’s been active in the prolife movement since 1994. He’s from “over the border” in Bergen County, but frequently works closely with prolife groups here in Rockland.

His 21 essays originally appeared on this website, but Full of Life presents them in one source. The essays are not intended to be biographical, but if you read them all you’ll find insights into the heart of a man who journeyed from mixed feelings about abortion as a college student to the front lines of the struggle – the sidewalk outside the abortion clinic where he strives – with never-failing love, compassion, and gentleness – to be a “last lifeline of hope” for a desperate pregnant woman about to enter its doors.