Members of the prolife community gathered on Perlman Drive in Spring Valley Sunday near the Planned Parenthood office to remember the 53million victims of abortion since the Supreme Court decision of Jan. 22, 1973, that overturned all state laws to protect the unborn. Sunday was the 39th anniversary of that decision.

Before the program began, Rabbi Nolson Leiter of Torah Jews for Decency spoke about the importance of putting prolife candidates in office, who will actively and effectively advocate for a true culture of life. 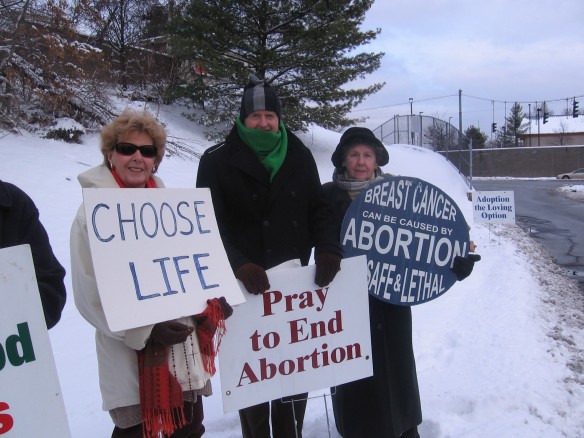 Then prayers were offered in reparation for the sin of abortion and for the protection of all human life. The group recited the rosary and the Chaplet of Divine Mercy, and Father George from St. John the Baptist Church in Piermont, spoke on the sanctity of human life.

The Perlman Drive site has been the epicenter of prolife prayer and protest for years. There is a local Planned Parenthood office in a strip mall nearby. While no surgical abortions are performed at that location, the Planned Parenthood Federation of America provides hundreds of thousands of abortions a year (324,008 in 2010, according to its own report).

This local event was scheduled for Jan. 22 to commemorate the actual date of the Supreme Court decision. However, since Jan. 22 has fallen on a weekend for the past two years, the annual March for Life in Washington, DC, will take place on Monday, Jan. 23. It was estimated that 400,000 protesters attended in 2009, when the March took place two days after Pres. Obama’s inauguration.

The March ends at the Supreme Court building. The decision that legalized abortion was not unanimous. There were two dissenters, Associate Justices Byron White and William Renquist. White wrote, “I find nothing in the history or language of the Constitution to support the Court’s judgement.” And the ultimate goal of the prolife movement is to restore to the unborn the protection of their right to life.