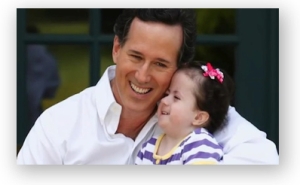 Last week Rick Santorum suspended his campaign for the presidency. Santorum, who never shied away from issues of life, faith, and family, is the father of seven, including 3-year-old Bella, who has Trisomy 18, a condition which, when detected prenatally, almost always results in the child being aborted.

Sometimes a candidate’s  strongest message is not found in his speeches or debate arguments. It emanates from who he or she is, and that can have the most powerful influence of all.  Below, Joe Klein, the Newsweek columnist, who says he disagrees with Santorum on “almost every possible issue,” nevertheless  admits that Rick and Bella have made him think about his own and our society’s response toward the disabled.

I am haunted by the smiling photos I’ve seen of Isabella with her father and mother, brothers and sisters. No doubt she struggles through many of her days — she nearly died a few weeks ago — but she has also been granted three years of unconditional love and the ability to smile and bring joy. Her tenuous survival has given her family a deeper sense of how precious even the frailest of lives are.

All right, I can hear you saying, the Santorum family’s course may be admirable, but shouldn’t we have the right to make our own choices?

Yes, I suppose. But I also worry that we’ve become too averse to personal inconvenience as a society—that we’re less rigorous parents than we should be, that we’ve farmed out our responsibilities, especially for the disabled, to the state—and I’m grateful to Santorum for forcing on me the discomfort of having to think about the moral implications of his daughter’s smile.